Traditionally, there’s been a bit of a tug-of-war between playing the Pass line or making place bets on individual numbers. Remember, the pass line can still be played after the come-out stage of craps: well, not directly, but via the Come, whose odds are roughly the same. The very reason the casino offers the Come line in the first place is so the house doesn’t have to lose out on potential betting activity after the point has been established. 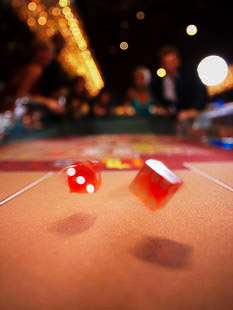 There are a lot of arguments made by both proponents and opponents of either betting strategy. Some of these arguments are based on sound science, while others are just idiotic, inane, and utter nonsense. Betting according to the latest trend will never work. Nor, for that matter, will a recourse to comparatively ancient strategies do you any good.

The key differences between the Pass line in place bets really come into focus when we’re talking about taking the odds. Should you bet directly on the numbers? Or go with the odds? Now: by directly placing your numbers you’re able to choose precisely which numbers you want to bet on. You’re able to call your bets off and remove them whenever you feel like, and laying a place bet on 6 and 8 gives a house edge that is fairly close to the Pass line percentage.

Also, perhaps crucially, whereas you choose the numbers on a place bet, the same cannot be said of a Pass line or Come bet. And just as crucially, place bets can be added or removed at any time, whereas Pass line and Come bets have to stay on the board once a number/point is established.

So, let’s talk in numbers and figures. Let’s say you bet $10 on the Pass line or the Come. Looking at your average odds, you know that the expected loss on the $10 is around 14 cents. That’s because these squares have roughly a 1.4% house advantage. Now, if you were to make a place bet on the 6 and 8 squares it would have to be in multiples of $6, meaning you’d need to bet at least $12 dollars to match (or at least come close to) the $10 minimum Pass line bet. On this wager, the expected loss is 18 cents, because of the 1.52% house edge.

So it really becomes a question of mathematics: would you rather lose 18 cents or 14 cents? Sure, you could buy bets on 4 and 10 and also have a pretty low house edge, but you often need to buy them at quite high sums in order to get those good odds in the first place.

Okay: we’ve done a lot of explaining and discussing here. But what’s the take-home message? The Pass line bets give you the lowest possible loss per bet, which, by extension translates into the best risk–reward ratio on the craps table. While it may seem like a conservative bet, the Pass line really does give you the best odds possible.